2015
James McCrae took silver in the 800m at the Midland Counties Indoor Athletics Championships in a blistering time of 1:56.03.
Previous
Next

14/02/2015
Bourne Grammar School pupil and Nene Valley Harrier James McCrae ran in the Midland Counties Indoor Athletics Championships at the Barclaycard Arena (NIA) in Birmingham on Saturday. In a rare outing indoors James was delighted to win a silver medal in the U20 800m final in a time of 1:56:03.

In a fast run race James was always in a good position on the shoulder of former winner Jeremy Barnes. However, as Barnes faded at around 650m McCrae swept past into the silver medal position but was unable to catch the runaway winner Adam Wright from Rugby & Northampton whose time of 1:53.64 put him 3rd in the UK. McCrae’s time also took him to 10th in the UK off what has been largely Cross Country training.

His next outing is in the National Cross Championships at Parliament Hill where he is looking for a top 50 and then he has the England Indoor Championships in Sheffield. McCrae said after his Midland’s outing, “that has set me up well for a busy spell of Championship racing. The winter has gone really well so far and hopefully that will carry over into the Summer for me”. 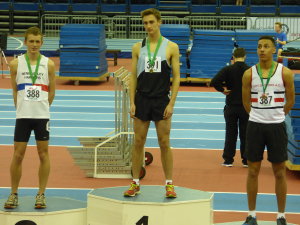