2014
A group from the young end of Nene Valley Harriers showed their support by attending a match between the National Squad of the Air Training Corps and NVH today at RAF Cranwell. The athletes from NVH took part in the ATC National Championships with the first four ATC cadets past the post representing their National Team. Here's Ken's report.
Previous
Next

22/03/2014
A group from the young end of Nene Valley Harriers showed their support by attending a match between the National Squad of the Air Training Corps and NVH today at RAF Cranwell. The athletes from NVH took part in the ATC National Championships with the first four ATC cadets past the post representing their National Team. The positions shown are our athletes positions in the overall race with the position in the Corp match shown in brackets. The intention is to assist the young men and women of our services to gain their National Representation colours.

It was a cold day with a sharp breeze but after the fog of two years ago and the cancellation due to snow last year it was good to see our athletes involved with the potential service personnel of the future and having contact with serve officers of the RAF camp. It is good for them to experience the Corps standing rank and file then marching up to receive awards.

Despite competing against their National squad, NVH athletes won three out of five races and also picked up two bronze medals. The under 15 boys team also won the match against the Corps. Ollie Bowling lead the team with an impressive win, well clear of the field, he was supported by Austin Herbert winning his bronze plaque in third and Will Baker in 5th. Making up the balance of the team were Bradley Allan 16th (8th) and Edwin Flack 22nd.

Jake Richardson was the overall winner of the under 17 men's race again holding onto a substantial gap over strong ATC regional teams. Two under 17s had stepped up to the under 20 race so as to ensure that the Corps athletes won their colours. This was very good of Bradley Spurdens and Damian Rutterford both of whom are 15 years old and competed against lads some 4 years older. The remaining under 17s, Michael Cawood 6th and Jamie Toms 15th (7th) supported Jake to ensure a team completed its scorers.

Our other winner came in the under 20 men's race with Lloyd Kempson taking apart a string field shortly after leaving the starting field. The two under 17 lads supported Lloyd well with Brad big dip finish to take 4th and Damian coming in a very creditable 8th (7th) place. the team just missing out in the match against the Corps.

Our fifth individual award came in the ladies race which included the under 17 and under 20 age groups. Emily Brand took the bronze award with a very strong race being beaten by a NVH team mate competing for the Corps (Katie Hutchinson 2nd) and a high quality winner from the Wales and West region. Emma Penniston ran well, running her first race after coming back from injury two weeks ago. The course took its toll but she finished well in 6th place. they were supported in the team by Annie Gray 10th (7th), Phoebe Whattoff 11th (8th) and Leigh Ann Rose in 14th.

The ATC leaders and the Commandant of the Air Training Corps both expressed their grateful thanks to the NVH athletes for making the event a close contest and also enabling their cadets to win their colours. The athletes attending appeared to have a great time and enjoyed the buffet provided for all afterwards. 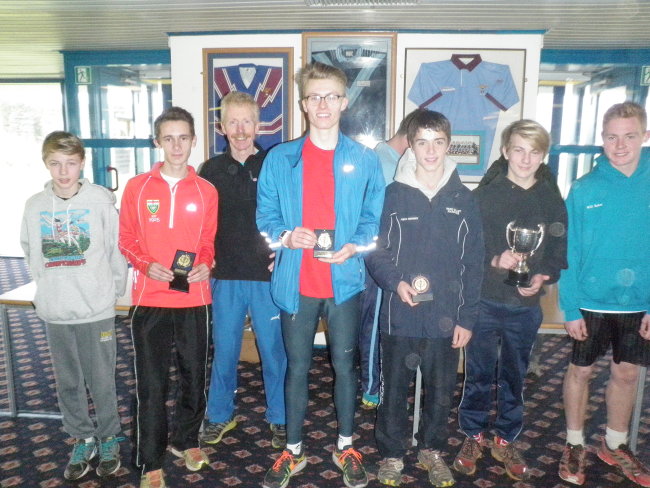