News & reports
A depleted Nene Valley Harriers senior squad attended their third Southern league fixture at Colchester. The Harriers were topping the table but were facing the third, fourth and seventh placed teams in this match. Here's Ken Maggs' report.
Previous
Next 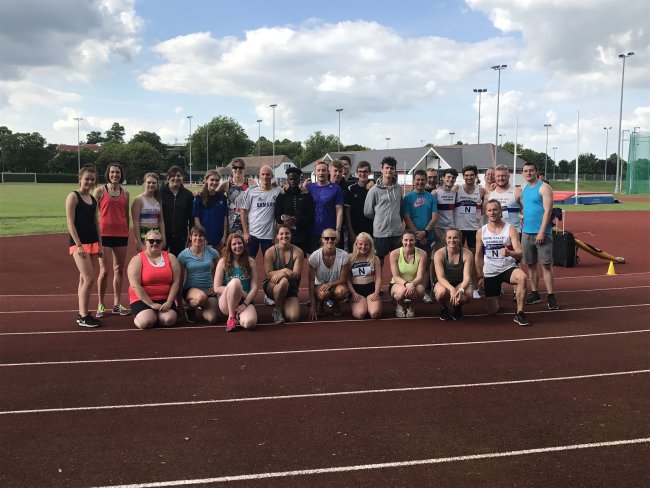 A depleted Nene Valley Harriers senior squad attended their third Southern league fixture at Colchester. The Harriers were topping the table but were facing the third, fourth and seventh placed teams in this match. Here's Ken Maggs' report.

A depleted Nene Valley Harriers senior squad attended their third Southern league fixture at Colchester. The Harriers were topping the table but were facing the third, fourth and seventh placed teams in this match. The squad was without athletes who were attending the England Athletics Under 20 and Under 23 Championships on the same day, several who had the Anglian Schools 24 hours later, exam stresses and unfortunate injuries.

Despite the absentees, those athletes attending showed true team spirit in ensuring every event had its due contingent of Harriers with the likes of Paul Parkin stepping into the 800m and 5,000m (masters 55 age group), Claire Smith competing in the 400m hurdles in order to allow usual hurdler, Dev Spencer to compete and win the b string pole vault; but with a special mention to Gemma Skells who forwent her usual 100m and 200m picking up a third place in the 800m and second place in the 3,000m.

The clubs spirit and effort was rewarded with a massive 27 point win on the day. Despite not being aware of any other results at the time this means that they will go into the fourth round of fixtures at the top of the table.

The team support was there for all to see and when the club started off the day leading after the 400m hurdles with wins from Rosie Jacobs, Sean Reidy and Phil Wilson and a double in the ladies pole vault thanks to Rosie Fresen winning the A string event. A feat emulated in the lad’s event with Carl Titman and Sean Reidy recording the wins.

So many wins were recorded on the day but it should be recorded that the NVH throwers, Martin Tinkler, Simon Achurch, Isaac Huskisson and David Bush dropping just two points in four throws events, equally emulated by Andrea Jenkins, Becki Hall, Lydia Church, Ellie Mae Stokes and Alex Stubley who only dropped three points.

Ellie Mae also teamed up with Emily Maltby to dominate the jumping events with just one point dropped in the horizontal versions. Emily also recorded wins in the A string short hurdles and 100m. Georgie Ivens dropped down to the shorted sprints due to a house move the day before and the club having suitable replacements in the 400m. Georgie recorded good wins in both the short sprints.

The men’s 200m saw Sean Garmory record his second win and indeed personal best of the day following his 400m win earlier on just a few minutes after his late arrival. Road works around Peterborough and diversions through more road works caused a number of late arrivals and on the day changes.

Emily Maltby was the top points scorer of the day with 16 from an incredible five events just outscoring master, Simon Achurch and Ellie Mae Stokes scoring 15 from four events. All stepping into events putting club points ahead of personal performance – as did many others on the day.

The team photo at the end of the day really showed what this match meant to the team which was also continued well into the evening at Rosie Jacobs, 21st birthday celebrations later on. As well as the team winning the important match, they also dominate the man of the match awards with Martin Tinkler (Shot), Sean Reidy (400m hurdles) and Sean Garmory(400m) being the top three men and Andrea Jenkins (Hammer), Becki Hall (Shot), Ellie Mae Stokes (Long jump) and Lydia Church (Hammer) taking all but the winning spot for the ladies.

A great day out setting up important remaining fixtures at Crawley (8 July) and Southampton (19 August) which could decide whether the league trophy returns to Peterborough after a years absence.